Pumping non-stop like a healthy heart, Suzanna Brytan’s ladle dips from pan to plate, serving an unending supply of plump and tender perogies and fuelling Baba’s Bistro with her energy and enthusiasm.

Like the restaurant it’s named after, the booth at Taste of Edmonton specializes in Ukrainian comfort food. Both restaurant and booth serve to raise funds for St. John’s Institute, a non-profit organization that provides affordable housing and food services.

Despite the long lineups, Brytan says her customers are quick to point out their “baba makes better perogies than we do.” For her, the supreme compliment comes when her customers say, “Those were as good as my baba used to make.”

Working the booth at Taste of Edmonton is a break from Brytan’s usual role as the executive director of St. John’s Institute. She enthuses about the people she works with. “They have such amazing skill,” she says. “The way people’s faces light up when they see food that looks so appealing, they almost don’t want to touch it, because it’s so beautiful.”

Brytan says one of the best things about volunteering at Taste of Edmonton is when the vendors swap food with each other. “I love food, but I hate boring food,” she says, freely admitting that the cheese bread from Pampa Brazilian Steakhouse is her favourite from another booth.

As a volunteer who has worked in other Canadian cities, Brytan said it’s very easy to make a positive difference in people’s lives here, “because organizations are very willing to accept any contribution you’re willing to make.” 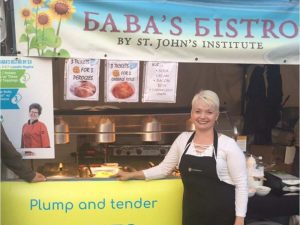