Sunday evenings at St John’s Institute are typically a quiet time to wind down the weekend. March 2, 2014 was an exception to the rule. Stephania Romaniuk, skilled songstress and composer, staged a full live show of her new release in SJI’s Living Gallery, backed by an exceptionally talented group of Calgarian Jazz musicians. 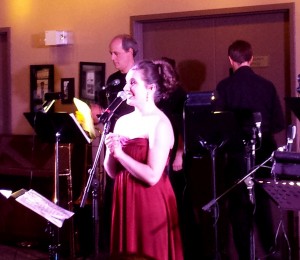 In front of a packed audience of admirers of all ages and genres of music aficionados, Stephania walked onto the stage in an elegant evening dress to join the 7-piece band that had assembled in Edmonton for this special occasion. The big band sounds of the violin, clarinet, flute, tenor saxophone and stand-up bass served as the instrumental backdrop for Stephania’s powerful, opera-influenced jazz vocals; audience members were even inspired to dance!

Based on songs primarily composed by well-known Ukrainian Canadian composer, Bohdan Wesolowsky, and co-produced by Edmonton’s own veteran broadcaster and arts advocate, Roman Brytan, the album struck a strong chord with the crowd.  Stephania dedicated many of her numbers to the memory of Ukrainian immigrants who fled to Canada after WWII. During the show, audience members could be heard shouting “Слава Україні! Героям і Героїн Слава!” – “Glory to Ukraine! Glory to her heroes and heroines!”

Special thanks to the Buduchnist Credit Union (BCU) Financial Group, the BCU Foundation, the Ukrainian Canadian Foundation of Taras Shevchenko (UCFTS), and Romaniuk’s personal Kickstarter campaign for their sponsorship and support.