St. John’s Institute was organized in 1918 under the name M. Hrushewsky Ukrainian Institute (named after a great Ukrainian historian, writer, and statesman, Mykhailo Hrushwsky- 1886-1934). It is an autonomous institution with its own character and is affiliated with the Ukrainian Self-Reliance League of Canada known as S.U.S. 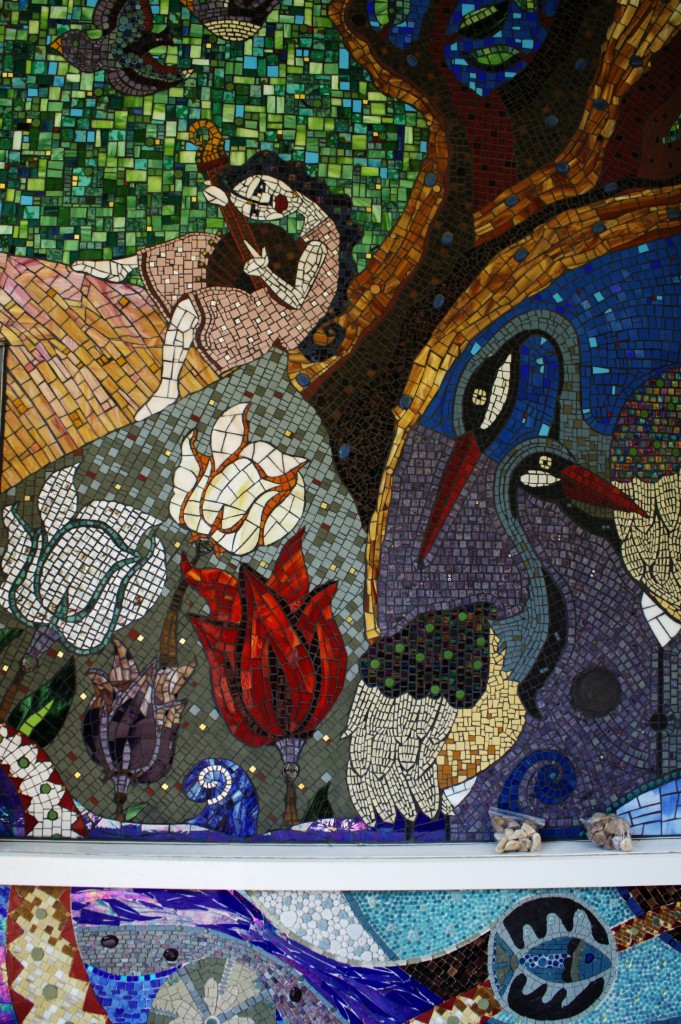 A section of SJI’s mosaic, created by Theodora Harasymiw

St. John’s Institute has its own membership, volunteer Board of Directors, and strong educational and cultural objectives. The highest executive authority of the Institute is set by its membership at their annual general meeting. It is at this meeting that the Board of Directors and its various committees are elected. It owns a building located on 82nd Avenue in Edmonton, AB. It also owns some property for future expansion and summer camp, “Bar-V-nok”, at Pigeon Lake.

St. John’s Institute was originally organized as a residence for students of Ukrainian descent attending the University of Alberta, or other schools of higher learning. Residing in the Institute, students had an opportunity to learn of their Ukrainian cultural heritage, Ukrainian language, history, literature, Orthodox faith, and other Ukrainian studies.

Peter Mohyla Institute, organized in Saskatoon in 1916, was considered to be the parental organization of this kind. However, in Alberta, the first such institution was the T. Shevchenko Institute in Vegreville, organized by Peter Svarich. This small institution housed only 14 boys and 4 girls. Its first rector was William Kuriets (Corry).

For the first nine months the M. Hrushwsky Institute was housed in a rented building known as Hotel Caledonia, which had a capacity for 35 students. The first rector of the Institute was a medical student, A.T. Kibzey. One of its first residents was Michael Luchkovich who was the first Ukrainian to be elected as a Member of Parliament (1926). The Institute was officially opened on October 1, 1918.

On June 10, 1919, the M. Hrushewsky Institute and the Taras Shevchenko Institute in Vegreville amalgamated and a larger building was purchased on 98th Street and 106 Avenue. An adjacent building was also purchased to serve as an auditorium. From then on, for many years, these two buildings became the centre of the Ukrainian national, cultural, and religious life in Edmonton.

After the purchase of the building, many financial problems arose. Many meetings and conferences were held to decide how to raise the necessary funds to pay off the debt and to plan for the future.

In spite of the difficulties, the members of the Institute felt great pride in the fact that over the years so many Ukrainian students passed through the halls of the Institute, were given an opportunity to finish their higher studies under the guidance of dedicated leaders, and henceforth become capable leaders themselves. This part of the history is well described in the book, “25-th Jubilee of the M. Hrushewsky Ukrainian Institute”, by P.J. Lazarowich.

In 1949, the Board of Directors, under the Chairmanship of Dr. N. Holubitsky, purchased a building near the campus of University of Alberta which formerly was Robertson’s College. With the change of location, the Institute was re-named St. John’s Institute after its chosen patron saint, St. John Chrysostom- a great philosopher and leader of the Orthodox Church in the fourth century.

The purchased building at the new south-side location was old and could only accommodate 30 students. In 1953-1954 the Board of Directors headed by Dr. N. Holubitsky, P.A. Miskew, S. Mysak, and the rector- Very Rev. W. Senechen, took a very daring step by forming a far sighted recommendation which was presented to the members of the Institute at the annual general meeting and which urged that a new Institute building be erected. In 1955, a contract was signed and money borrowed for the construction of the new St. John’s Institute building. That year, Dr. S.L. Yaremchuk was elected as the Chairman of the board, and it was mainly due to his capable leadership and constant perseverance that the building project was successfully completed. The members donated generously to the building fund. A very sustainable sum of money was received as a legacy from the estate of Mr. & Mrs. John Kinasewich in 1952.

The first wing of the building was constructed along side of the old building. The corner-stone was blessed by the Most Reverend Metropolitan Ilarion on June 8, 1958, and officially opened on the 20th of September of the same year. The old building was then demolished and a new wing was built on the site. The new wing was officially opened on the 18th of September, 1960, with Bishop Andrew officiating.

This completed the new building which since that time has been housing up to 80 students. It is hoped that in future, St. John’s Institute will continue to prosper and maintain its cultural activities and Ukrainian studies.

Compiled from Original by Mrs. Samoil